We recently started our Autumn series of tastings with an excellent evening run by one of Chateau Musar’s UK representatives, Elliot O’Hara. 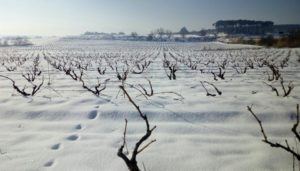 Chateau Musar vineyards under snow in the Bekaa Valley

Over the course of the evening he took us through Musar’s early release wines the ‘Jeune’ red and the ‘Hochar Pere et Fils’, followed by three vintages of the Chateau Musar red (2006,2001 and 1999!). The last two wines were the lesser known wines in their range, the Musar white (2008) and finishing the evening with the L’Arack de Musar.
After introducing the Musar Jeune (an unoaked cuvée, made from Cinsault, Cabernet Sauvignon and Syrah, from vines planted in 2000), he took us through a potted history of how Chateau Musar developed. Established in 1930 in Lebanon, Gaston Hochar harvested their first vintage in 1933. Interestingly the Chateau’s vineyards are in the Bekaa valley away from the coast between the Lebanon and Anti-Lebanon mountains, whilst the Chateau is in Ghazir on the coast. Historically the fighting has occurred in the Bekaa, so the Chateau buildings have been shielded from the fighting. Though cultivating grapes in such a war torn place is not without its challenges, they have only missed two vintages due to the fighting. 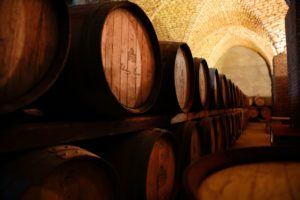 A small section of the vast cellars at Chateau Musar.

The Jeune was the lightest of the wines for the evening, with appealing juicy red fruit, whilst still showing Musar characteristics. The ‘Hochar Pere et Fils’, was a natural progression in the range with the wine spending 6 months in oak, with Grenache replacing Syrah in the blend. The wine had more structure then the Jeune and prune/raisin fruit from the grenache.
We then embarked on the main event of the night, tasting three vintages of their main cuvée. The Chateau Musar red is a blend of Cabernet Sauvignon, Carignan and Cinsault from vineyards near the Bekaa Valley villages of Aana and Kefraya on gravelly soils over limestone. Planted from the 1930s onwards, yields are low from these mature bushvines, whilst growing concentrated fruit. The different grapes are fermented with natural yeasts independently and kept in separate barrels before blending in the third year and bottled unfiltered and unfined. The wine is kept at the Chateau for 4 more years before release. 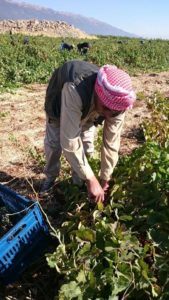 The 2006 vintage broke the mould, as when they tried it in 2013 they considered it not ready! Each year they tried it and finally in Spring this year, they considered it ready for release. This is a fine example of a mid-weight Musar, with plenty of red fruit and just a touch of the tertiary flavours to come. The next two wines (2001 and 1999) showed how Musar develops and changes as it matures, from those red fruit notes to more savoury and gamey flavours. Both drank exceptionally well for 16 and 18 year old wines, showing both complexity and intrigue. They demonstrated the depth of flavours that a quality, relatively mature wine can show. 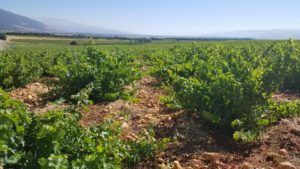 Musar vines at the height of Summer

After the reds, the solitary white of the night, the 2008. It is not often that you have the white after the reds in a tasting, but on this occasion it made sense. The white is made from two indigenous varietals, Obaideh and Merwah, said to be related to Chasselas, Chardonnay and Semillon. The wine is fermented in French oak barriques for 9 months, bottled and blended at the end of its first year and released seven years after the harvest. This is a white to be decanted for several hours then served at room temperature. An incredibly complex wine, it evolved the longer it spent in the glass. On the palate it balanced gently stone fruit with hints flower, honey and lemon, backed by good acidity which enables the wine to be aged as long as the reds. This is a wine I will certainly return to soon. 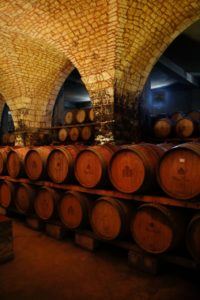 We finished with the L’Arack de Musar. This is wine distilled 4 times, with Syrian anise added in the fourth distillate. This is Chateau Musar’s biggest selling product in Lebanon, where it is served throughout the day! Though the version sold in Lebanon is distilled just the 3 times! This was poured out right at the end of the tasting, as otherwise the smell of aniseed would have overwhelmed all the wines. An unorthodox and fun finish to the tasting, I found it refreshing, once I added a drop of water or two!

Read more about the wines we have in stock HERE!