Earlier this month I was lucky enough to go on a three day trip to sunny Rioja.  After a turbulent flight across the Bay of Biscay, we landed in a drizzly Bilbao. We quickly headed South, and the weather brightened as we left the mountains and enter the Ebro valley, in which Rioja is located.

We headed for our first stop in the South-East corner of Rioja Baja, Bodegas Manzanos. After a short lunch (by Spanish standards), we went on whirlwind tour of their vast vineyards. Highlights included watching their 8-man pruning team at work, 4 months into their shift pruning 300 hectares of vines! 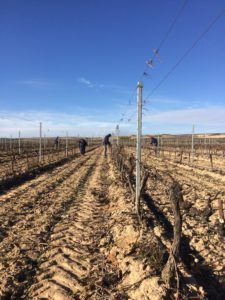 And visiting a plot of old vines that they a planning to produce a single-vineyard cuveé from. The visit to the winery concluded with a range tasting, including their Finca Manzanos range, where they bottle three of the varieties usually blended in Rioja as single varietal wines: Tempranillo, Graciano and Garnacha. 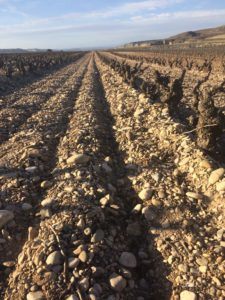 After an enjoyable evening in Calahorra, we set off to the North East to Rioja Alavesa to visit Bodegas Canas and their side-project Bodegas Amaren. First we headed to Bodegas Amaren, which was based in a beautifully renovated 1930’s wine cooperative. 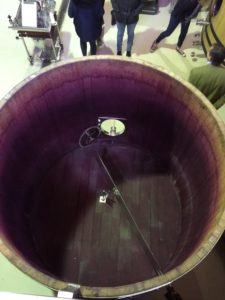 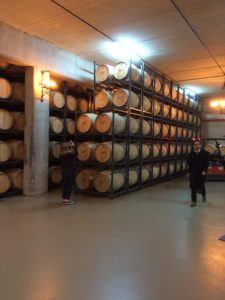 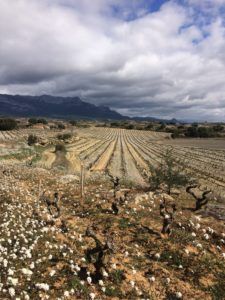 Old organic vineyard in the foreground, note the different soil and vegetation compared with other vineyard.

We had an excellent tour, which included barrel tasting their graciano, garnacha and tempranillo, a useful exercise for future tasting. We then head up to a small vineyard on the edge of the town, this was part of one of their future projects. The vineyard was made up 100 year old pre-phylloxera vines tucked on the side of a sun-soaked knoll. They are experimenting with the blend and the best oak to complement the wine at the moment, but it should be pretty spectacular when it is released.

We then headed on to Bodegas Canas. After a whirlwind trip round their winery, we tasted their wines’ in beautiful glass walled viewing area that looks over their vines. One of their wines, a reserva with some Cabernet Sauvignon blended with the Tempranillo, was one of my favourite wines of trip and we are now stocking it. The Cabernet Sauvignon is not allowed in Rioja, but the estate planted some when the rules were previously relaxed and thus have ‘grandfather’ rights to use the varietal. The inclusion of the Cabernet Sauvignon complements the dark fruit of the tempranillo, whilst adding structure, very tasty! 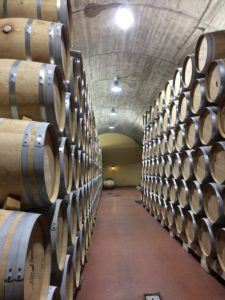 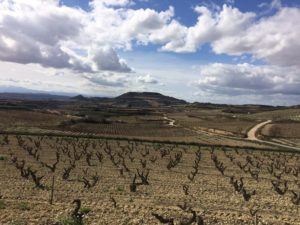 After an extremely hearty lunch we set off to the capital of Rioja, Logrono. I have fond memories of this city, having walked through it in 2012 during my Camino de Santiago. It did not disappoint, plenty of wine bars selling delicious tapas and nicely busy for Tuesday night in March, well worth returning again, especially for the oyster mushroom dish!

In the morning we set of to our last Bodegas, Abel Mendoza. Compared to the other Bodegas we visited this is a much more artisan operation with smaller quantities produced and a more singular approach. Upon arrival we had a second breakfast with Abel and his wife, of cheese, charcuterie and his latest vintage of Jarrarte Joven, a carbonic macerated wine (the same winemaking technique they use in Beaujolais) and his Guardaviñas, a no-sulphur biodynamic wine. We then headed out in to vineyards in the back of Abel’s Range Rover, finishing at his top plot the Marrarte vineyard. This vineyard is in a beautiful sheltered natural amphitheatre, which has been used for wine-making for centuries with an ancient carved ‘lagares’ present in the rock below the vineyard. Abel bought the vineyard in a derelict state, and has been renovating it for the past 15 years. He now gets his top fruit from here. 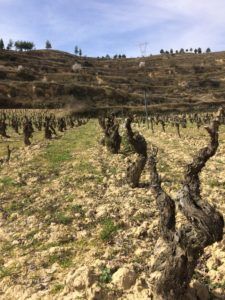 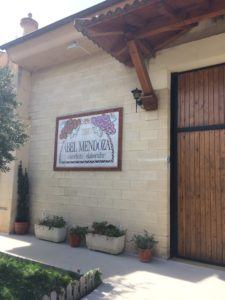 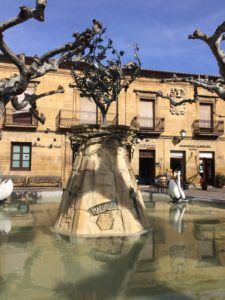 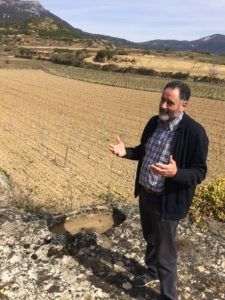 We finished with a sumptuous lunch and tasted a portion of his whites and all the reds we had not tried. He produces an amazing white’ The 5V’ which is a blend of 5 different white varieties-Tempranillo Blanco, Viura, Garnacha Blanca, Malvasia and Torrentes. This had beautiful depth and lovely bruised orchard fruit on the palate. The next vintage is released in April which I look forward to! We were also lucky enough to try his top red wines, the ‘Grano o grano’ range, the grapes for these wines are subject to a rigorous selection process, literally ‘grape by grape’. The Graciano was spectacular with an amazing nose and luscious fruit, truly beguiling. We now have this in stock  and would make an amazing present for a Rioja fan. 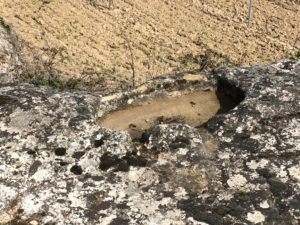 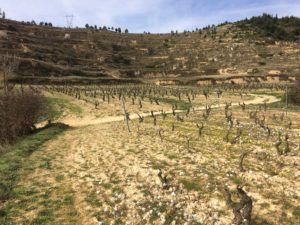 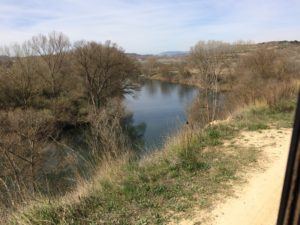 After this whirlwind trip I am already planning to return soon to Rioja. A great place for wine, food and good people.

Wines to try from the trip:

All online payments are currently unavailable whilst we carry out maintenance. You will be able to place orders from the 1st of July. Thank you for your patience. Dismiss