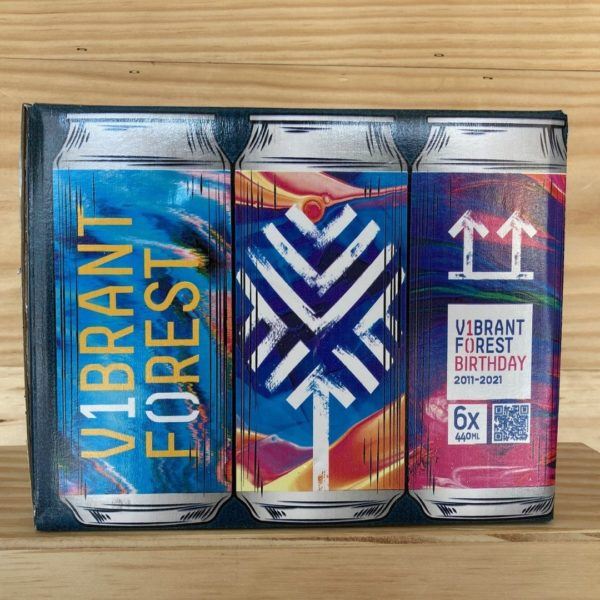 To celebrate 10 years of Vibrant Forest Brewery the team have been very busy brewing 6 brand new and very special beers to release.

These 6 new beers are packaged in a specially designed commemorative box including a 20 page history of the brewery.

Now, onto the beers themselves:

#1 IMPERIAL PUPA 8% ABV
It was always going to be hard to resist brewing a version of our best selling beer, Pupa, so we did it, of course! We have literally doubled the amount of hops which have gone into this and the extra body from the ABV helps balance all this citrus glory.
Supa Pupa?

#2 TALUS IPA 6.4% ABV
Lashings of Talus hops take centre stage in this IPA. A huge whack of Wheat and Spelt malt form a thick base upon which citrus, tropical fruit and hints of coconut sit comfortably. Ludicrously good!

#4 RED IPA 6.4% ABV
This one is all about a little sweet malt from specially selected grains and big citrus hops from bundles of Simcoe and Centennial. An under-rated style which we absolutely love!

#6 Kveik Nelson Sauvin Pale 5% ABV
Nelson is one of our favourite hops so it simply had to make it into the 6th and last of our special birthday beers. Fermented at a whopping 38C using Kveik yeast and heaps of Nelson Sauvin.
Freshly crushed Gooseberries & Grapes lead the way with with some citrus notes from the Kveik.