I took advantage of being in London at the end of a long weekend to take in a tasting on leafy Upper Street in North Islington. The tasting was a range tasting of Equipo Navazos. 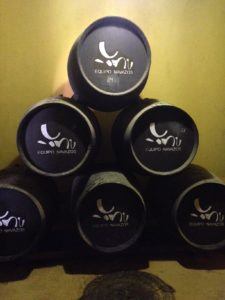 Equipo Navazos are somewhat unique in the wine world, through their “La Bota” series they source wines from soleras and individual casks throughout the Sherry region that have been relatively neglected by the market in the last few decades. Often these wines are from some of the most prestigious bodegas in Andalusia, where the wines either don’t fit into their range or are in too small volume to be viable for them to release the wine commercially. Equipo Navazos provides an outlet for these unique wines to be released to market. Equipo Navazos also work with producers and winemakers outside of the Sherry region to produce some unique and interesting wines.

The wines were divided by the area within the sherry region they were from, with two points of the ‘Sherry triangle’ represented, with Sanlúcar de Barrameda and Jerez, and another area further inland outside of the traditional triangle, Montilla.

Before the sherry we had a couple of sparklers from their project with Colet in Penedés. These are made in the same way as champagne, but given a sherry twist by using different sherries in the secondary fermentation. This give the wines delicious unami and bready notes.

The wines from Sanlúcar de Barrameda were next. The town is rightly famous for its speciality, Manzanilla. Manzanilla is made the same way as Fino, but the proximity to the Atlantic means that the seasonal variation in temperature is smaller and it is more humid, which allows the Flor (the layer of yeast protecting the sherry from oxidation) to remain thicker. Thus, Manzanilla are generally lighter and show a distinctive salty tang. This is one of my favourite styles of sherry and these did not disappoint, with amazing freshness combined with unami depth, making them a perfect Summer aperitif.
I then moved onto the wines from Jerez. With some superb Finos, a Palo Cortado, an Oloroso and a divine cream sherry there was plenty to enjoy. However, the stand out wine for me was the Navazos Niepoort, this is not sherry as it is not fortified, but a Palomino fino must that is aged under a layer of flor for 8 months before bottling, seriously drinkable.

Tasting the heavier (more oxidative wines) from Jerez and Montilla, your palate became slightly overwhelmed by the intensity of the flavours. There was so much going it felt like my palate was only picking out 1 in 5 flavours. These are serious wines to be mulled over and could go with more complex dishes.

Overall, this was a tasting that shined a light on both the quality and diversity of wine available from the Sherry region. We do stock some of these wines and they are worth exploring.

Made from unfortified palomino fino must. The wine is fermented in sherry casks, then aged for 11 months under flor. An intense and pungent aroma of apple, almond, baked bread and citrus. Aromatic and bold, this savoury wine is dry with a saline streak.