We have just returned from our annual pilgrimage to Jerez de la Frontera in Andalusia. It has now become our tradition to pop on our running shoes and run in the Sherry race, which involves running 14km around the hills of Jerez with optional stops for sherry and tapas along the way!

Tackling the hills of Jerez!

Jerez is part of the sherry triangle along with Sanlucar de Barrameda and El Puerto de Santa Maria. Sherry is a seriously undervalued drink that can range from the super dry Fino’s and Manzanilla’s to the very sweet Moscatel and Pedro Ximinez’s and everything in between. The wines are also amazingly food friendly with the dryer styles matching dishes like fried fish, olives and prawns to the more nutty/oxidative styles that pair to more robust dishes such as grilled pork or steak. The sweet wines can almost be a dessert on their own, Pedro Ximenez poured over ice cream can make for an easy but delicious dessert, or pair sweet Moscatel to stick toffee pudding!

Whilst in the region we always like to visit some Bodegas, taste the wines and find out what the new Spring release of the ‘en Rama’ is like. The style ‘en rama’ is sherry that has been drawn straight from the barrel without any or very minimal filtration. The lightest styles of sherry such as Fino and Manzanilla often undergo excessive filtration and clarification which although produces a wine that is really clear and with a long shelf life, it also strips out a lot of the delicious flavour. 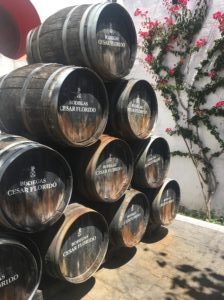 Barrels at the Bodega

Each Spring several Bodegas have started to release an ‘en rama’, and it is definitely one to try for the sherry lover! It is a richer, more expressive style and one to pair to seafood dishes, juicy olives and toasted almonds. This year we visited Bodegas Cesar Florido down on the coast in a little town called Chipiona. This small, artisan Bodega is unusual for the region in that they grow their own grapes and produce their own wine. 5th generation Cesar conducted the tour round his three small bodegas spread across the town. We were lucky enough to taste all of his wines from barrel as well as try the newly bottled Fino ‘en Rama’ of which only 600 half bottles are UK bound *arriving Mid-May * 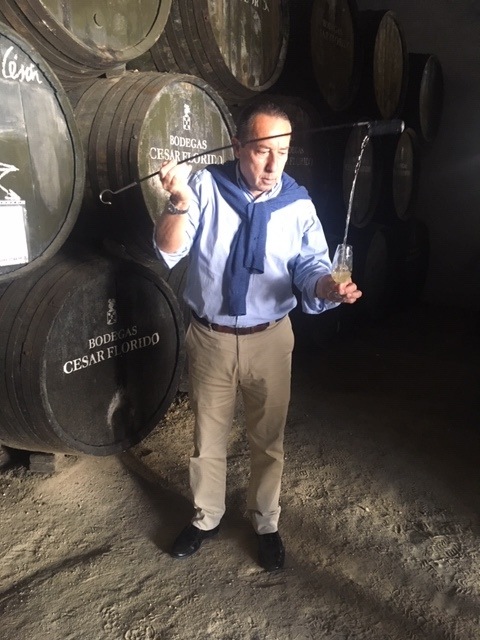 Cesar Florido using a Venenciador to pour the ‘en rama’

Cesar Florido is most famously known for his sweet Moscatels of which they produce two. The first Moscatel Dorado is grape juice that is fortified and then aged, and is a light style enjoyable as an aperitif or with light and fruity desserts. The second is Moscatel Pasas, Cesar explained that the grapes are left out on mats in the sun to dry for 15 days in which time the juice concentrates and the fruit raisins, the grapes are then pressed and the juice fortified. This is a richer style with dried fruit notes and nuts and on tasting is almost a dessert on its own!

Our visit ended up with Cesar directing us to a fantastic off the tourist track seafood restaurant where we could try the local speciality gambas and freshly grilled fish accompanied by his dry en rama , and to finish flan with the moscatel dorado!